by The Dayna Clay Project 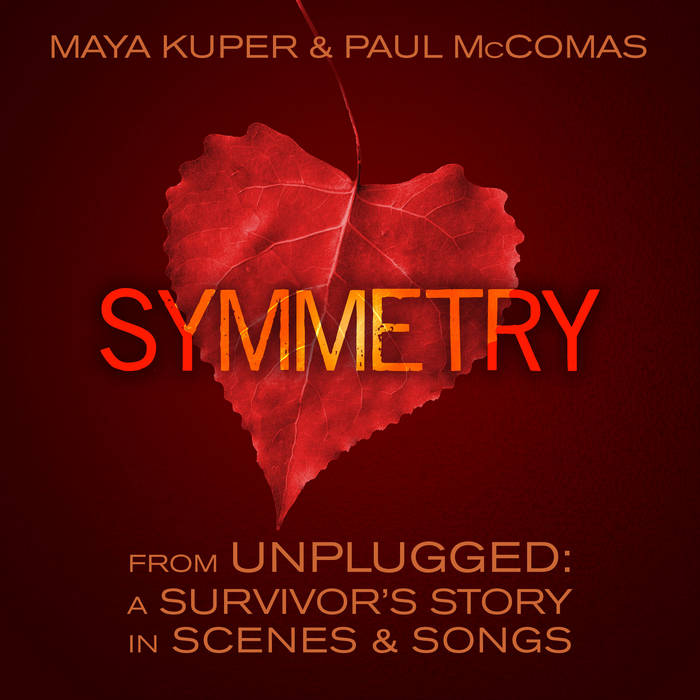 All proceeds from UNPLUGGED benefit the Rape, Abuse & Incest National Network (RAINN)'s National Sexual Assault Hotline, as well as The Kennedy Forum, which works to eliminate the stigma around mental illness and enforce parity for behavioral healthcare.

Although Dayna’s story is a work of fiction, UNPLUGGED addresses very real issues. Through songs and scenes adapted from McComas’ acclaimed novel, the show chronicles Dayna’s bumpy journey out of depression, through the South Dakota Badlands, and into self-discovery, healing, full embrace of her bisexuality, and love.

Early this morning, while I was passing underneath a prairie cottonwood, I glimpsed a flash of crimson fluttering down from above.

Reaching up, Dayna surprised herself by actually catching the leaf in mid-fall.

Studying my prize, I fell into a kind of reverie, and I found myself pondering, at length, the symmetry of nature:

The leaf’s intricate network of veins mirrored, in miniature, the branches from which it had dropped—not to mention the other, unseen tributaries anchoring the trunk to the earth below.

The realization made me gasp—and it moved me in a way I couldn’t quite fathom. For, all at once, it hit me: The veins are the branches are the roots.

From high in the air to deep underground, the cottonwood tree—
and every tree—
emphatically asserts its “treeness” throughout.

They can have their Bible, 'cause here it is in the palm of my hand: the divine plan.

And now, perched atop a towering land formation with a nasty north wind in her face, Dayna finds herself taking this line of thought further.

I've seen it out here dozens of times in dozens of ways: the land sustains not just flora but fauna as well.

And in so doing, that land embraces male and female in equal measure, engaging and enriching both of those sexes—
and everything and everyone in between—
with an unerring and unerringly even-handed devotion.

And what, finally, is “God” if not the seed-sowing, life-growing spirit flowing through that land:
through bison and bighorn,
pine tree and prairie grass,
mountain
and canyon
and...and Dayna herself?

My own nature mirrors Nature.

Throughout her adult life—and even earlier, in her teens—there have been those who've told her how wrong her feelings are,
from the boyfriend who labeled my attraction to other women “a phase,”
to the leader of a women's “support” group who provided anything but, accusing me of “coming halfway out” and deriding my professed feelings for men as a cover.

At times, under the weight of such criticism, she's wondered whether her detractors on one “side” or the other might be right.

Yet the land itself seems to suggest otherwise—and to do so by example.

Looking out, Dayna views the vista before her as if for the first time.

Do I really believe in a higher power? Well, maybe. But I think I do know what it means, at least for me—
for her, who loves female and male,
women and men—
for her to have been made in a higher power’s image.

Any lingering trace of guilt connected to who I am and whom I have loved—
that trace of guilt, at long last, has...
...vanished. For now, I know that my Creator feels the very same way.